Baritone Shakti Pherwani is an actor-singer-dancer, specializing in Musical Theater and Opera.

In August 2019 Shakti sang the role of Rizzardo (and also covered the role of Fillippo) in the London Bel Canto Festival's production of Bellini's Beatrice Di Tenda where he sang with the London City Philharmonic Orchestra. As a Young Artist at the festival,  he also performed in the Young Artist Concerts and Masterclasses, where he was mentored by coaches such as Bruce Ford, Nelly Miricioiu and Kenneth Querns Langley. Shakti's performance was appreciated by critics in both the shows' reviews.

Shakti then went on to study and cover the title role in a semi-staged production of Mozart’s Don Giovanni in Lanciano, Italy in early September.

Shakti has been a recipient of various scholarships and his solo engagements in India have included singing the role of Ben (The Telephone, Menotti) - and a selection of opera scenes concerts. He was a finalist for the ‘Young Musician of the Year’ Competiiton held by the Olga&Jules Craen Music Foundation in 2016 and was selected from young artists around the world to be a Caux Artist at the Caux Palace, Switzerland in 2015. 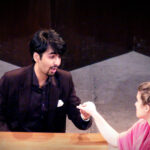 When in nature, you feel lost and nothing seems pe

You never know beforehand what you are capable of.

As the year winds down to a close , be like a tree

"Take a look at the five and ten, it's glistening

How many lessons of faith and beauty we should los

What do you do while the dervishes are whirling? Y

Because on somedays a smile is the best thing you

So, this is not exactly a #Halloween Costume... bu

A walk around Paris provides lessons in history, b

Two roads diverged in a wood, and I took the one l